As people recognize the magnitude of food waste and its contribution to greenhouse gas emissions and global warming, interest in finding ways to reduce food waste, globally and in Canada, is escalating. A private member’s Bill (it was defeated) was introduced in February 2016 to support the development of a national strategy to reduce food waste in Canada, and the National Zero Waste Council continues to take leadership in advocating for the reduction of food waste and Canada’s carbon emissions through its proposed National Food Waste Reduction Strategy. Waste reduction is also being discussed at the provincial/territorial level (e.g., Addressing Food and Organic Waste in Ontario).

Embedded in these proposals are the assumptions that measures are required to promote the donation of edible food waste by the private sector to food and other community organizations and that food waste can be used effectively to address problems of hunger and food insecurity. Both claims are seriously misguided. While corporate food waste definitely should be reduced, it is questionable how much of the edible food currently going into landfills could and would be salvaged if there was more donation of unsaleable products to food banks and other charitable food organizations. Furthermore, food banks — ad hoc, voluntary organizations that collect and redistribute donated foods to those “in need” — cannot address the large and growing problem of household food insecurity.

For more than 30 years, charitable food assistance providers have been forging partnerships with food producers, manufacturers and retailers to collect edible “leftovers” for their clients. Most provinces and territories now have Good Samaritan legislation to absolve corporate donors of liability for the health and safety of food donated to food banks. This legislation frees the food industry to donate products that do not comply with the standards applied to food retail and food service operations in Canada. Corporations are currently able to write donated food off as a loss, while benefiting financially from savings on disposal costs and garnering public goodwill from their generous support of food charities. Measures to stimulate increased donations to charitable food programs are not needed. Even proponents of corporate tax credits, such as Food Banks Canada, acknowledge that the introduction of such credits would reward corporations for current practices, but would not lead to dramatic increases in food donations. The situation in the United States is also instructive, as American corporations have been receiving tax credits for food waste donations to charities since the 1970s, with little evidence of any meaningful impact on either food insecurity or food waste. An estimated 32 million tonnes of food are wasted each year in the US, but donations to Feeding America (the national food bank network) diverted only 3.7 percent of this food to charitable programs in 2014. Moreover, despite extensive investments in public and charitable food assistance programs, food insecurity in the US is more than double that in Canada.

Nearly 13 percent of households in Canada, or more than 4 million individuals, experience food insecurity — insecure or inadequate access to food due to financial constraints. This represents an increase of more than 600,000 individuals between 2007 and 2012. Household food insecurity is tightly linked to low household income. It erodes people’s health, setting the stage for a host of mental and physical health problems. Food-insecure individuals are less able to manage chronic health conditions and they consume 2.5 times the health care dollars of those who are food secure. It is a public health problem that requires immediate government attention (figure 1).

Food banks, the chief mode of food charity in Canada and the target of proposed waste reduction initiatives, are incapable of addressing the problems of food insecurity. Research consistently shows that only about one-quarter of food-insecure households use food banks; most do not, and those who do are not rendered food-secure. While receiving food charity may diminish hunger in the short term, this is a far cry from food security; that is, being able to meet future food needs independently. Getting a free bag of food isn’t enough to achieve this. This also holds true for charitable meal and snack programs. 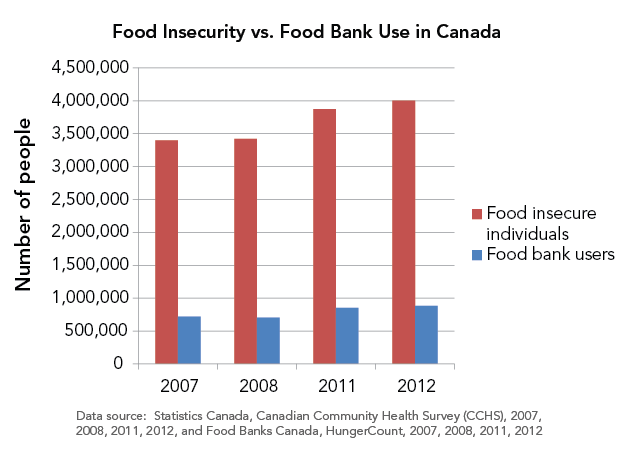 Food banks lack the capacity to meet even the short-term needs of those who seek their assistance. Their operations are completely dependent on donations, so what they have to give out is simply what they were given. It is routine for food banks to restrict the amount and frequency of food assistance given to any one household and to report having to cut back on the amount of food they distribute because demand exceeds supply. The help food banks provide is nowhere near enough to change households’ abilities to meet their basic needs. Most food banks are also limited by lack of funding and limited staff resources. They and other charitable food programs are heavily dependent on volunteer labour; volunteers are responsible for receiving, sorting, parcelling, storing and distributing food. Furthermore, most food banks operate only one to two days a week, and many are reliant on donated space. Most are operating at full capacity to provide as much safe food as they can to their clients. Channelling more surplus food would further tax an already fragile system.

Operating outside of the normative food safety legislation means that food banks have had to develop and institute practices to deliver safe food. They literally have to “get their hands dirty” going through donated foodstuffs to discard inedible waste and sort the remaining food into stages of freshness, so that it’s stored and distributed appropriately. Charitable food assistance programs also bear the costs of disposing of donated foodstuffs that cannot be distributed. Increasing the volume of surplus food donations that are exempt from the usual food safety standards will increase the burden on voluntary organizations to manage this food. It will heighten the need for well-trained volunteers to separate edible from inedible food; increase the volume of food waste that these agencies must dispose of; and possibly pose an increased food safety risk to food bank users.

In summary, while incentives to increase the distribution of edible food waste through community-based charitable food assistance programs might seem like an effective way to reduce corporate food waste and also help food-insecure Canadians, the evidence does not support this proposition. Charitable food assistance is incapable of improving households’ food security because it does nothing to address the root cause of food insecurity — the lack of money underlying the struggle to put food on the table. Scaling up food charity will not change this fundamental limitation. Moreover, because food banks are already functioning at capacity, they cannot handle more “surplus” food donations without also receiving an infusion of resources to expand their food handling, storage and disposal facilities and to substantially increase their labour force.

Public investments to expand food bank infrastructure are indefensible given the ineffectiveness of this system in reducing food insecurity. The evidence is clear: The reduction of food insecurity requires policy interventions that will improve the financial circumstances of very-low-income households.