Report released April 5, 2016
UPDATED MAY 12, 2017: We have recently learned that Ontario, Newfoundland and Labrador, and Yukon opted out of food insecurity measurement in 2015 and 2016. The reports have been updated to reflect this development.

Our annual reports are provided under the terms of a Creative Commons Attribution 4.0 International License. This license allows for free redistribution, as long as it is credited to PROOF.

Household Food Insecurity at Record High in the North, According to U of T Researchers

Despite anti-poverty efforts, hunger in Canada has not decreased – and it has now reached epidemic levels in Nunavut, where almost half of households suffer from food insecurity, according to a new study by University of Toronto researchers.

One in six children under the age of 18 in Canada lives in food insecure households, according to Household Food Insecurity in Canada, 2014, a report published by PROOF, a U of T research group.

Household food insecurity is the inadequate or insecure access to food because of financial constraints.

In Canada, rates of food insecurity are monitored by Statistics Canada through the Canadian Community Health Survey. In 2013-14, the food security survey was optional, and Yukon, British Columbia, Manitoba, Newfoundland and Labrador opted out.

High rates of food insecurity have persisted across the provinces and territories that participated in the survey. Food insecurity is a serious public health problem that takes a measurable toll on individual health and well-being, and costs our health care system.

“The rates in the North suggest a state of emergency,” said Valerie Tarasuk, PROOF Principal Investigator and nutritional sciences professor at U of T’s Faculty of Medicine. “We’ve seen no substantial decrease in rates across the country over the past couple of years, despite poverty reduction strategies in many provinces. We think it’s time for concerted policy action.”

Households with children under 18 were at greater risk than households without children. Across the country, nearly one-third of lone-parent families headed by women were food insecure. Other household characteristics associated with food insecurity included low income, being Aboriginal, being Black, and renting rather than owning one’s home.

While being on social assistance was a major risk factor, the majority of the food secure households in Canada were reliant on employment income.

“We know that social assistance recipients are particularly vulnerable, and the latest numbers show rates of food insecurity as high as 82% among people reliant on social assistance in Nova Scotia and 83% among those in Nunavut. At the same time, we shouldn’t lose sight of the fact that the majority of food insecure households in our country are working families.” said Naomi Dachner, co-author of the report.

The full report, the fourth in a series of annual reports on food insecurity in Canada, will be available to download from PROOF’s website as of Tuesday April 5, 2016.

PROOF publishes research on household food insecurity in Canada. Recent publications include an examination of the impact of Newfoundland and Labrador’s poverty reduction strategy, the link between food insecurity and health care costs, and the food insecurity in metropolitan areas. All reports/articles are available from PROOF. Please send an email to: proof@utoronto.ca 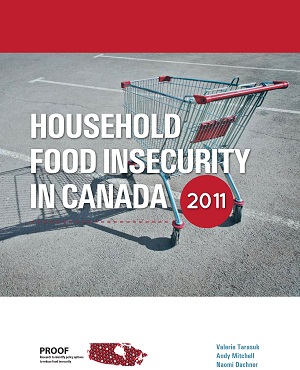 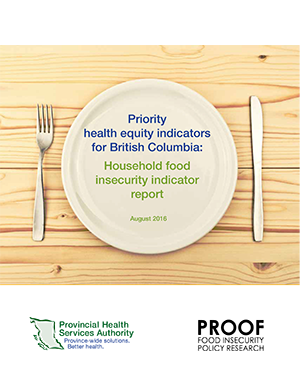